LUNKER structures are crib-like, wooden structures installed along the toe of a stream bank to create overhead cover and resting areas for fish. These structures were originally developed in Wisconsin for trout stream habitat improvement projects, but have been found to work well as bank protection devices. A LUNKER structure consists of two planks with wooden spacers nailed between them. Additional planks are then nailed across the spacers perpendicular and crib like structure is formed.

LUNKER structures were developed after years of experience with other, less successful structures to stabilize streambanks, and provide habitat and cover for fish. Oak blocks, made from short sections of tree trunks, are used as spacers. Oak planks are nailed to the tops and bottoms of the blocks, forming stringers which tie into the stream bank at right angles. Oak planks are then nailed to the top and bottom of the stringer boards. These boards parallel the stream bank. The whole structure forms a crib, which can be constructed on shore and moved be a crawler-loader to the installation site in the stream. The structure is anchored by driving lengths of reinforcing rod through predrilled holes in the structures and then into the streambed.

When the structure is secure, face rock (large rocks with flat bottoms and faces) is placed on top of it. After all of the face rock has been placed, the area around the structures is backfilled with additional rock. Ideally, enough rock should be placed to the level of the normal high water mark. Rock should also be placed upstream and downstream of the structures to form a continuous line of rock around the outside bend of the stream.

Soil is bulldozed and raked over the top of the rocks to the edge of the face rocks. Sod scraped from the stream bank is placed along the outer 2-3′ of the structure (this will prevent erosion of soil until the seed becomes established). The area is then raked smooth and seeded down.

Because the water current flows through the LUNKER structure, no silting occurs at the lower end. The oak spacers also block the current enough to provide several resting places for trout in each structure.

After installation of LUNKER structures, stream banks that once had severe erosion, silted stream beds, and overly wide channels, blend into the natural setting and last a lifetime. 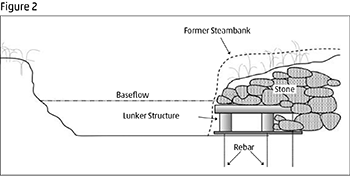 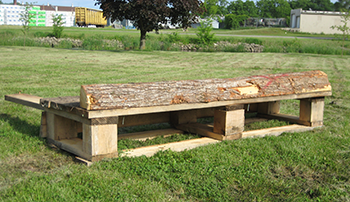 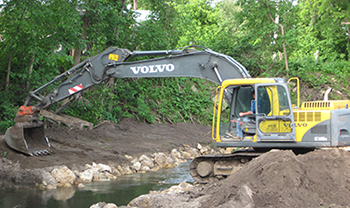